Welcome, Horror fans, to another Stitched Saturday.  Hope your Friday the 13th was luckier than usual, and that you managed to take part in some of the Stitched Smile fun from yesterday – if you missed it, worry not – you can recap from this blog. There are all manner of free bits of fiction and excerpts from some of our excellent books.

The challenge a fortnight ago was – in honour of one of our resident poets (and Stitched editor) Lance Fling – poetry based!   I gave two pictures for inspiration, and the fruits of your labour can be found below under each one.

The next Stitched Saturday will be on the 28th of October, and will be a Halloween special. To which end, we’re going freestyle – stories of poems of any length, but they have to be Halloween related.  Get them posted as comments here, and let’s see if we can’t have a bumper crop of Halloween horror stories!

See you in a fortnight, and – as ever – #StayStitched!

Bloodied metal falls on deck as weapons find their mark-
we are now outnumbered, to die here on a lark.
A company of miscreants, sentenced for our past-
as lasers sear my visor, I realize I’m the last.

Johnson, Scott, and Duncan, oldest friends of mine-
are joined by Fields and Sutton, blood spilling out like wine.
The enemy advances forth, closing for the kill-
errant shots rip through the hull, vacuum ends their thrill.

I float in noiseless empty space; all my friends drift by-
lifeless metal, burnt death traps, I try to close my eyes.
But memory is now burned in, the sight will not disperse-
to haunt me to eternity, to live through this is worse.

Remembering when Sutton, new guy in our group-
would show us the holograms, of his ever- growing troupe.
And Scott and Duncan pranking, as was their normal state-
by switching names on armor, or changing duty slates.

These misfits who had my back, just like I had theirs-
now interred in darkened space, an end to their affairs.
As I begin to fade out too, a movement in my eye-
bright light of a transport, appearing at my side.

The images of bloodied friends, plays on flash repeat-
their faces melting off their skulls, as no one sounds retreat.
Seared and shattered armor, filled with flesh and skin-
float around my body, from a fight we could not win.

The High Command with tally sheet, checking off five more-
will scarcely mark their absence, just notes now on the score.
I dream that I still see them, walking in the dorm-
joking, full of horseplay, as was the daily norm.

Then the flesh, it starts to melt, the air a sickly sweet-
my haunted eyes jerk open, as I jump to my feet.
The darkened room confuses, I know not why or where-
or how I came into this place, so burnt out I don’t care.

I’m sweating in the darkness; all my friends are dead-
but I still hear them laughing, somewhere in my head.
They tell me that it’s been six months, but that just can’t be right-
I still hear them in the corners, screaming out each night. 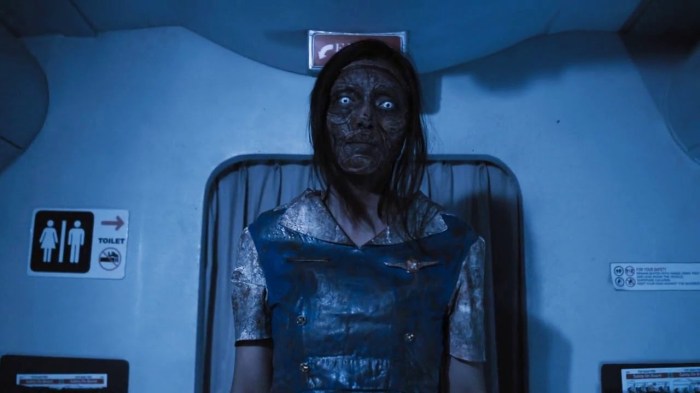 There’s no asking for another drink now; the hostesses have all left
You know the safety video off by heart – you’ve become quite deft
at knowing all the exits, from where the oxygen mask will fall
but it matters not a jot; you’re flying up to your downfall.

And then you’re lurching skywards, your seatbelt firmly tied
For all the good that it will do.  The sky, it opens wide,
The ground, it quickly vanishes.  On it, you’ll not set foot again.
You’re bound with all the others to this infernal metal plane.

The seatbelt sign, it switches off, but you stay firmly seated,
Just hoping that Oh God, just once, that this won’t be repeated,
That this one time, from all the times, you’ll survive this dreaded flight
And wheels will touch down safely on the tarmac this damned night.

But every time, your hope is dashed, as the same refrain unfolds;
The brat that’s kicking at your seat to his mother’s helpless scolds.
The exact same announcement about speed and flying times
The turbulence and every lurch, as your plane slowly climbs.

In a minute that hostess will trip; you grimace when she does,
Knowing time is now repeating. You’re fearful now because
You know what happens – every bit – you’ve seen it all before
and know the look on that girls face who leaves the pilots door.

Your eyes meet for a moment; does she see it too?
Has she recognised this moment as being more than Deja-vu?
If she does, she doesn’t let on. She merely stops and turns
And speaks softly to the passengers, her face etched with concern.

You mouth every word the woman says, heard a dozen times today.
“Ladies and Gentlemen, there is something that I need to say.
Now there’s no need to panic, but we’re going to turn around
There’s a problem with the engines that we’ll get fixed on the ground.”

With that last word she stares at you, making eye contact,
But the planes already banking before anyone can react.
The passengers are restless, alarmed by what she said,
You know they’d be more alarmed if they knew they’d soon be dead.

You heard the hostess’s whispers, you’re certainly no fool,
The problem isn’t with the engines, the problems with the fuel.
Their worried tunes are panicked now, an agitated mutter,
Then engine one and engine two began to cough and sputter.

There’s a moment of brief weightlessness as the plane begins to stall,
And with an angry violent lurch, you’re plunging in freefall,
A chorus of panicked screams and sobs the theme for your demise,
As the dead-winged metal coffin falls helpless from the skies.

“Will there be any pain this time?” you desperately plead,
as you hurtle to the ground at a catastrophic speed.
The earth rushes up to meet you, and your prayers are overlooked,
Your body evaporated, as in infernal flames you’re cooked.

You feel the flesh melt from your bones, your lungs filled up with flame,
And through the screams of burning souls hear someone speak your name.
You wake up with a start to find you’re sat back at your seat,
As a kindly hostess asks you if you want something to eat.

The world ended on a Wednesday.

On Wednesday, everything and everyone was gone, buried under rubble left behind when the shockwaves circled the globe in minutes, then bounced and ricocheted off each other for hours. On Wednesday, the entire surface of the planet was plowed under by the violence of the ‘waves, crushed, pulverized, and sown into a uniform terrain of rubble, watered by muddied oceans. On Wednesday, the beings from space turned Earth into their garden.

On Thursday, their garden started to grow.

Corpses, rising like wheat — twisted, mangled rising to the warmth of the sun. When they matured, they were hungry, driven to spread more of the alien seed.

David Court is a short story author and novelist, whose works have appeared in over a dozen venues including Tales to Terrify, Strangely Funny, Fears Accomplice and The Voices Within. Whilst primarily a horror writer, he also writes science fiction, poetry and satire. His writing style has been described as "Darkly cynical" and “Quirky and highly readable” and David can't bring himself to disagree with either of those statements. Growing up in the UK in the eighties, David's earliest influences were the books of Stephen King and Clive Barker, and the films of John Carpenter and George Romero. The first wave of Video Nasties may also have had a profound effect on his psyche. David also works as a Software Developer and lives in Coventry with his wife, three cats and an ever-growing beard. David's wife once asked him if he'd write about how great she was. David replied that he would, because he specialized in short fiction. Despite that, they are still married. View all posts by David Court