One of Mike Duke’s favorite quotes from his new novel LOW, soon to be released. Here at SSP we couldn’t wait to share what Duke has in store for you, so we convinced him to share a little bit. A little sneak preview, if you will. A tiny tease, an amuse bouche, something to whet your appetite and make you hungry for what’s sure to be a dark and terrifying ride. 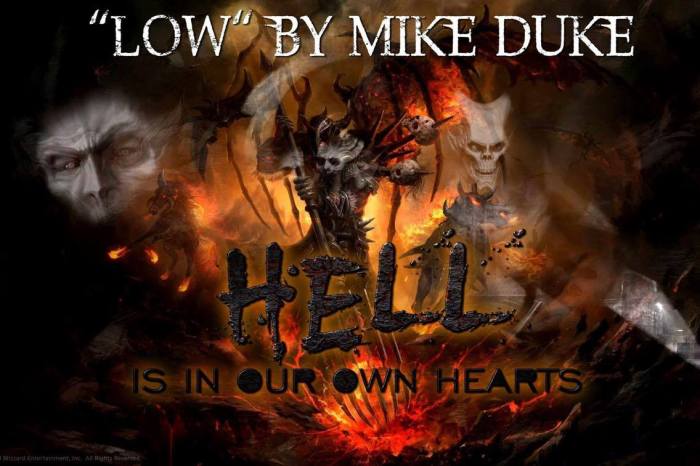 Officer Mark Adams is fed up with God, his wife and the legal constraints of his job. He longs for a life he can enjoy and to see true justice meted out.

Chad Bigleby is a lawyer thrown into a deadly moral quagmire, forced to decide whether he will abide by man’s laws or make his own.

Each man is being driven to the edge of his limits.

Both men are on a collision course.

All because something wicked has arrived in Pleasant Grove, something ancient and obsessed with vengeance, eager to punish the souls of men for their sins.

How LOW will they go to get what they desire most? And what will it cost them in the end?

I sat down with Duke and asked him a few questions about LOW.

MF: Mike, how long did it take you to write LOW?

Mike: I started writing it in 2009 and finished the rough draft in 2012. I submitted it  multiple times and took the feedback from each rejection and did numerous rewrites to refine the story.

MF: Where did the idea come from?

Mike: I got the initial kernel of an idea for LOW out of the blue one day, riding down the road listening to my iPod. Two songs played in a row and the two themes just kind of meshed in my head. Metallica’s “All Nightmare Long” and “Testament’s Low”. I envisioned some kind of entity that torments people in dreams and night terrors, and combined it with the thought of how low will we go to get what we want. There was a lot of work to do after that, but that was the initial spark.

MF: What do you think sets this story apart?

Mike: One, I think the premise, though Dante-esque in some ways, is original as far as the nature of the supernatural entity and his motivations. In dealing with moral issues and weaknesses more common to men, I believe I’m able to present it with a voice of authenticity and authority. I was a cop for almost 12 years so I have first hand experience seeing how low people can sink to get what they want. 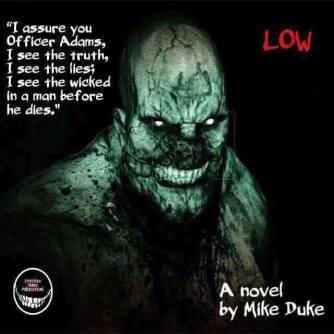 I’m sure by now, dear reader, you’re itching to read LOW, but you’ll have to wait just a bit more. It’s slated to be released this November. Until then, you can placate your appetite with this short excerpt, and if you’re really keen to get more, join us on Halloween night for the LOW per-release party on Facebook. 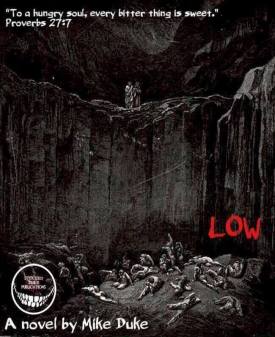 Glenda Harris was leaving the Gas N Go, a large colorful coat covering her heavy dark skinned frame, when she saw a creepy old man and his dog lingering beside the building, almost invisible, the shadows wrapping them like a shroud, eating the streetlight’s glow. If her skin hadn’t prickled when she passed them she might never have even glanced over much less paused to stop and stare. The man’s lips parted in a smile and white teeth was suddenly all she could make out clearly, the brightness casting a cloak over what she had seen before. Like some Cheshire cat, his smile hung in the darkness, tilting slowly to the right and then to the left before righting itself at last and revealing his face. She stood frozen, struggling to find words to break the spell of fear gripping her. “Umm…sir…this ain’t no place for an old white man to be all by himself at this time of night. Are you lost?” Her heart was beating out of her chest. She gripped the aluminum foil packet in her pocket that held the blessed roots and herbs and prayed they would do their job of warding off evil.

A voice, smooth like sand sliding over glass, a southern gentleman’s accent, projected from the shadows as the teeth disappeared. “Why, mah lady, how absolutely kind and considerate of you. I appreciate your effort but I assure you, I am quite dandy and in need of no assistance. You may be on your way without the slightest worry for my well-being.” The man tipped his head down and in her direction in parting recognition, then raised his right hand up and waved his fingers up and down to say goodbye, each finger falling and rising in succession.

Find out more about Mike Duke and LOW on Facebook,as well as his blog, Twitter, and on Amazon.

Horror, thriller, sci-fi … all are synonymous with author M. F. Wahl. Dark plots and a keen focus on character development will keep you chained to each frightful word. Wahl is a proud member of the Horror Writer’s Association and her first novel “Disease” is will be released by Stitched Smile sometime next year. Visit http://mfwahl.com/ for more information, or to get on the mailing list. You can also find Wahl on Facebook and Twitter.

View all posts by MF Wahl